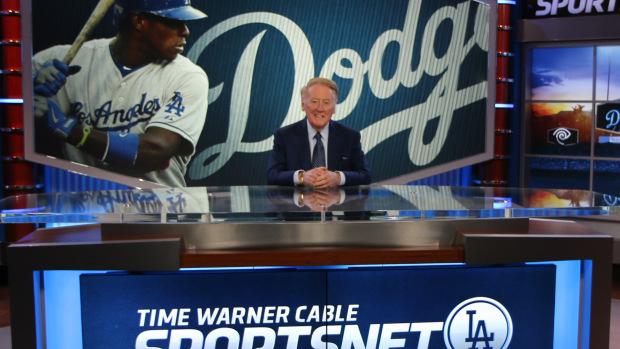 In the bottom of the seventh inning with a 1-1 tie against the San Francisco Giants and a runner on first and second base with two outs, Los Angeles Dodgers reliever J.P. Howell was looking to get out of the inning unscathed. But on a 1-1 count, struggling Pablo “Panda” Sandoval hit a slow rolling single in center field to bring home the eventual game-winning run home to win the game. But majority of Dodger fans, including Bishop Amat High School students, were not able to see this Giants tie-breaking hit on Wednesday night Apr. 16.

Majority of Major League Baseball teams held Opening Day ceremonies Mar. 30 and Los Angeles Dodger fans got a taste of what the remainder of the season is going to feel like with Timer Warner Cable. Madness began as the Dodgers faced off against the San Diego Padres in Petco Park. Fans were able to watch their beloved Dodgers on ESPN Network, which may be one of the few times a game can be watched outside of the brand new all-Dodgers channel which is only provided through Time Warner Cable.

For the time being the only cable provider that has SportsNet LA in Los Angeles is Time Warner Cable. This has been a surprise to many. Last season fans were able to watch over 50 games because they were broadcasted on local television channels, but this season games can only be watched through Time Warner Cable.

Due to the new owners, the Dodgers received their own network which shows everything about Dodgers 24/7.

In 2011 the Dodgers filed for bankruptcy when a new group of owners led by Earvin “Magic” Johnson bought the struggling team for a whopping $2 Billion because of the television rights which were up for negotiations. The Dodgers were no longer under contract from the previous cable provider which is why the team sold for so much. Once the Dodgers signed their new deal with Time Warner Cable they received $8.35 billion for Time Warner to set up the Dodgers Network.

Many Dodger fans are speaking out about how they feel with the situation.

“It’s frustrating not being able to watch them this season, especially when they’re expected to do so well. I feel like I’m missing out on an exciting time for Dodger Baseball.” says junior Joe Cruz.

Many fans are upset at the fact that they can not watch the games this year. Dodger fans have settled to watch the games online and receive updates on their phones through the ESPN SportsCenter app or the MLB At Bat app.

“I have DirectTV so I can not watch the Dodgers,” said junior Rayne Barragan. “I just get the ESPN updates on my phone. The only way I would watch it is if the other team had their game on TV or actually go to the game.”

Fans felt that the Dodgers should have ensured that their fans would be able to watch the games.

“Before signing the contract they should have ensured the fans would be able to watch the games no matter what provider,” said junior Christian Vega. “ I go to my grandmas house everyday to go watch the games if I do not actually go to the stadium.”

Unfortunately the Dodgers at this point have not reached an agreement in order to have the games broadcasted on any other cable provider besides Time Warner Cable.

70 percent of all Dodger fans are not able to watch the Dodgers. Students are not the only ones getting gypped. Local restaurants that signed yearly contracts with DirectTV are losing money because customers are not able to watch the games while enjoying a day outside the house with friends. Some businesses decided to switch to Time Warner Cable so they can provide the game for their customers and still make profits off the games.

Fans are waiting for a deal to be done, but might be disappointed because the season has begun and there is still a standstill in contract negotiations. For now fans will need to stick with games updates on their phones and game recaps in newspapers.