Bishop Amat travels to Seattle in the latest 2020 Football Schedule 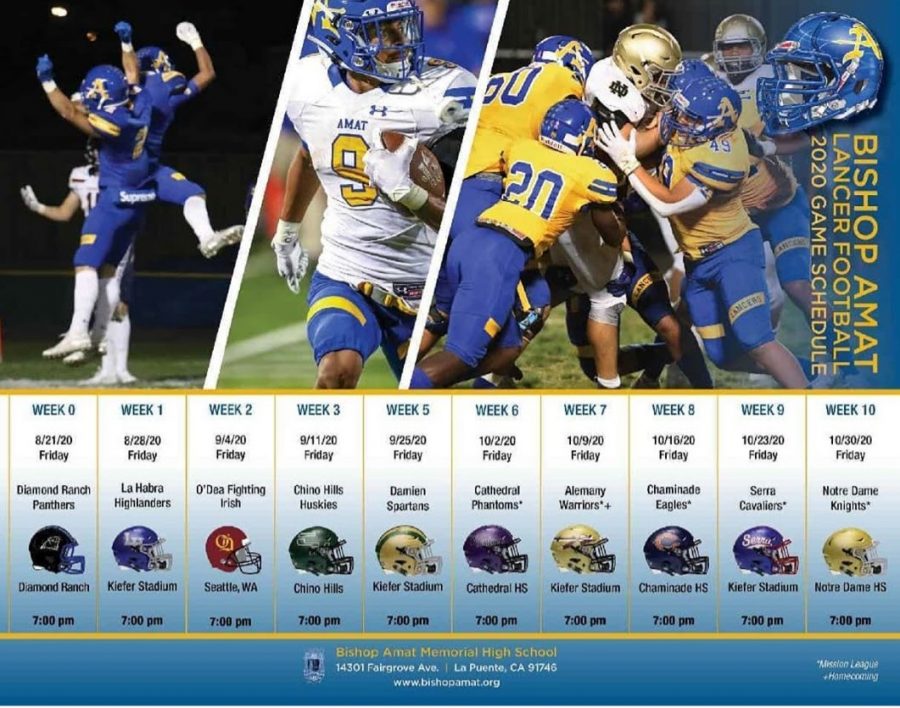 Bishop Amat football released the schedule for their 2020 campaign that includes a trip to Seattle, Washington. It also includes La Habra as a new opponent and is renewing an old rivalry against Damien High School.

After a one loss Mission League championship season, the Lancers will be the team to beat this year. Let’s take a look into the 2020 regular season.

WEEK 0 @ Diamond Ranch: The Lancers kick off the season on the road against the Diamond Ranch Panthers. Last season, Amat shut out the Panthers in a 17-0 victory. Diamond Ranch is also coming off an undefeated league title but fell short in the first round of the Division 5 playoffs. Bishop Amat’s stacked offense will be too much for Diamond Ranch to hold off.

WEEK 1 vs. La Habra: The Highlanders had one of their best seasons last year as they finished 10-3 and they also went undefeated in league play. Jake Garcia, USC-commit and transfer from Narbonne High School is one of the top QB prospects coming into the 2020 season for La Habra. This game will be high scoring on each side of the ball especially on offense. The environment will also be a factor for La Habra as it is the first home game for the Lancers.

WEEK 2 @ O’Dea High School (Seattle, Washington): The last time Amat traveled out of state, they lost to Loyola Academy in Chicago 3 years ago. They hope to come out of Seattle with a win against the No. 2 team in Washington, O’Dea High School. The Fighting Irish had an undefeated season last year, but came up short in the Washington state championship game. The game will be a defensive contest as both defenses held their opponents to 20 points or less last season. Bishop Amat’s explosive offense can challenge O’Dea’s defense but it won’t be enough for the Lancers as they take their first loss of the season in Seattle.

WEEK 3 @ Chino Hills: Last time these two played, Damien Moore led Bishop Amat to an easy 33-14 win against Chino Hills. I expect a similar result this year with soon to be senior, Dyson McCutcheon and wide receiver, Kyran Hayes to take charge on the road and bring home a win before their bye week.

WEEK 5 vs. Damien High School: An old rivalry is renewed this season as Bishop Amat will take on Damien under the lights at Kiefer Stadium. Damien is coming off a mediocre season with a record of 5-6 and is losing a ton of seniors for 2020. Amat, on the other hand has new upcoming stars to use in this game including QB Tobin O’Dell. The Lancers are hoping to get a win before Mission League play begins in week 6.

WEEK 6* @ Cathedral: This season Loyola was taken out of the Mission League and replaced by the Phantoms of Cathedral. They will definitely add more competition for the top spot in the league, but not for Bishop Amat. The Lancers demolished Cathedral last season as Damien Moore rushed for over 200 yds and 4 touchdowns in a 45-20 victory. Similar to last year, I expect Amat to shut down their high-powered offense and hold them to only 20 points.

WEEK 7*+ vs. Alemany: 2019’s meeting between these two was an instant classic as Bishop Amat pulled off the upset against a really good Alemany team 25-24. This game will be no different as quarterback Miller Moss and running back Floyd Chalk will be returning for Alemany’s offense. This game will look similar to last years, but there is one big difference this time around. The game will be played at Kiefer Stadium on Amat’s Homecoming night. Kiefer has always been a tough place to play for any team that came by, but on homecoming it’s a whole different level.

My Prediction: Bishop Amat wins 28-23 in a nail-biter.

WEEK 8* @ Chaminade: Chaminade finished in second place last season for the Mission League and had a huge Division 2 playoff run beating teams like Upland and San Clemente but eventually lost the championship to Sierra Canyon. Chaminade has a wide variety of young talent on the offensive side of the ball including sophomore Ian Duarte at wide receiver. Previous games against the Eagles have not been difficult for the Lancers and I expect the same this year.

WEEK 9* vs. Serra (Gardena): The Lancers final home game of the season against the Serra Cavaliers will be a good one. Serra did not have the result they wanted at the end of the 2019 season as they finished last in the league with a record of 1-4. Their roster lost Doug Brumfield at the quarterback position and many other key players on both sides of the ball. However, their new starting quarterback Maalik Murphy played a few games last year for the Cavaliers. It won’t be enough though as Bishop Amat takes home another win.

WEEK 10* @ Notre Dame (Sherman Oaks): Bishop Amat closes out the regular season with a road game against Notre Dame. Last year’s game against the Knights of Notre Dame was a back and forth shootout until Bishop Amat closed it out in the fourth quarter with a final score of 35-21. With soon to be junior quarterback Zachary Siskowic, the Knights can be a contender for the Mission League title. The Lancers hope to end the season on a high note before the playoffs begin.

The Lancers have very good odds to have an undefeated season for 2020. Their preleague games will be the true test of how good this team really is. This will be the second year with the new playoff format that combines Division 1 and 2 and the Lancers have a really good shot on making the Division 1 playoffs again. I predict that they get passed the first round for the first time since the Tyler Vaughns era. This can be a great season for the Lancers and I hope they accomplish a lot this season.