Maker Club welcomes new members as it preps for fair 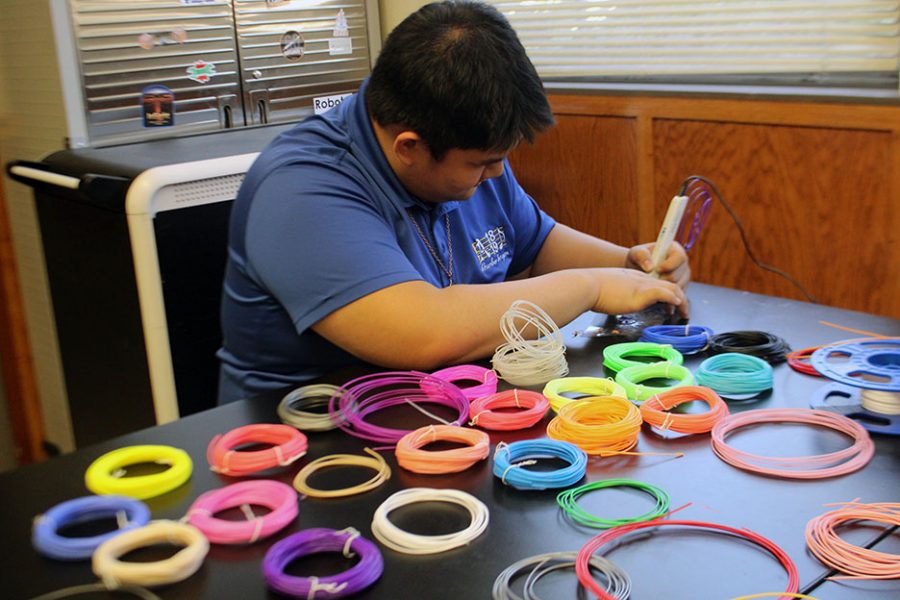 Edmund Zhou creating his own personal creation with the club's 3-D pens.

Walking into the Maker club meeting members were surrounded by colorful materials needed for their 3-D pen workshop.

They were gathered around the table, with smiles on their faces, teaching each other how to use the pens.

This is only one of many activities the club will be hosting in order to prepare for its second annual Maker Fair in February, following the first successful event last year.

Several dozen students showed up to the first Maker Fair to participate in the various stations that involved aspects of the arts, science, robotics, and technology. This included a slime station as well as an illustration station.

“The way I describe it is like a science fair combined with a carnival because it’s supposed to be fun like activities, you’re learning and doing things at the same time,” said Ms. Katherine Syroboyarsky, the club’s moderator.

The Maker Club also collaborates with the Robotics Club and the STEAM Club on campus in order to combine the interests and talents of students involved.

Ms. Syroboyarsky started this club six years ago after realizing that students wanted a platform to learn from each other and to celebrate their talents in the fields of arts and science.

“I started the club because the maker movement has been popular around the world for a while now,” Ms. Syroboyarsky said. “President Obama even made a national Maker day when he was president.”

Another important goal for Ms. Syroboyarsky is to help others understand what a maker space really is by getting the word out about the inclusivity of the club ranging from artists to engineers.

Club president Violet Peng said she joined the club because she likes art and math.

“I became president because it was like the perfect combination for me,” Peng said.

The Maker Club meets every Tuesday after school in Room 205 and provides club members with the opportunity to participate in activities such as building objects using 3-D pens. However, the club does many different activities as well.

“Right now we are doing a 3-D pen workshop, but later we are going to have experience with 3-D printers,” Peng said. “We will probably do work with animations as well.”

Many of the people who participated were new members and had various ideas for what they wanted to see at future meetings.

“I would like to see just some more hands-on construction type projects,” said senior Daniel Martinez.

“In future meetings, I want to see, since Halloween is coming up, maybe building things for Halloween,” senior Thomas Venegas said.

The Maker club hopes to donate art supplies to kids in need for their service project this year.